Archive for the tag “Supreme Court”

Equality is a Beautiful Thing!

So much has been said and written about yesterday’s decision by the Supreme Court to overturn the Defense of Marriage Act that I wasn’t going to do more than just jump for joy and yell “YES!” in the background. Then I watched this clip of Andrew Sullivan talking about what this means to him personally and I just had to share it:

He emphasizes that Justice Kennedy used the word “dignity” nine times in his opinion. Dignity. Exactly. All of this, at its core, is about dignity, about equality, about justice, about all the things we’re supposed to stand for in America but still struggle with every single day. We are far from perfect in how these ideals play out in our country, but the fact that the struggle for marriage equality, for equality for LGBT people in general, is finally being seen as a civil rights issue and finally being embraced by majorities in our country is huge. The first sitting President to say he believes in marriage equality, the repeal of Don’t Ask Don’t Tell, DOMA in the trash, thirteen states where same sex marriage is legal–we can, with confidence, say to bigots “You are on the wrong side of history. You and your bigotry will be left in the dust.” I know there is a lot more progress that needs to be made but I’m so damn excited about this, what it means for our country, what it means for LGBT people, what it means for my children to know equality isn’t just an ideal! And a big cheer to the State Department for releasing this photo with a statement by Secretary of State Kerry (yea, my hubby has an awesome boss and for all the complaining I do about the Department I LOVE that it embraces equality and has for quite some time) 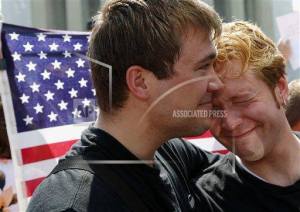 “The U.S. Department of State applauds the Supreme Court’s decision striking down an unjust and discriminatory law and increasing freedom and equality for #LGBT Americans.” – #SecKerry (AP Photo/Charles Dharapak) http://t.co/eOQeMmqK1s

When I opened my Facebook yesterday morning one of the first things I saw was the status of a friend of mine who married her wife quite some time ago, yesterday she proposed to her and now they get to be legally married and given protection under federal law. It’s just so exciting! I haven’t seen my friend in ages but she is such and sweet, kind person and when I see pictures of her with her wife the love that they have for each other shines through. And, now, that love is going to be legally recognized! Have I said I’m excited?

And a word to people who are upset about this …

Equality is a beautiful thing!