Archive for the tag “rescue”

This past weekend we were at a wonderful celebration with friends — a birthday party filled with lots of laughter and joy — when we stumbled upon this kitten.

We had just arrived at the party when one of the kids ran up to another and said “there’s a kitten over there!” and pointed off into the distance. I remember thinking to myself “oh no …” because cats here are very often left to fend for themselves. I left Eric to get our youngest, Ry, settled in (poor kid has a full leg cast because he knows one speed when he’s in goal — full throttle, and this was a paintball party so he needed some extra care) and walked in the direction the child had pointed. I saw a group of kids squatting around a tiny orange and white kitten whose eyes were so matted with mange he couldn’t open them, and I thought to myself “well, shit.” I could tell he wasn’t going anywhere, could tell he would be lucky to be able to move, so I continued on to greet friends and when Eric joined me I said “there’s a kitten over there who needs help, we’re taking him to the vet, we’re not leaving him here.” He nodded and walked back in the direction of the kitten, our youngest hobbling after him on his crutches. A few minutes later they came back, Ry sat in the chair next to me and said “mommy, we’re not leaving him here.” “No, baby, don’t worry, he’s coming with us and we’ll get him help.”

A few hours later he was on an exam table being poked and prodded by a vet. He took blood for a panel and tests, gave him fluids, a shot for mange, prescribed an antibacterial shampoo we are to bathe him in every four days and, after his blood tests came back and an infection was detected, antibiotics. We told him we thought he seemed to be maybe eight weeks old and he said that looked to be right. We also told him it seemed like he was very close to death and, again, he nodded and said yes. 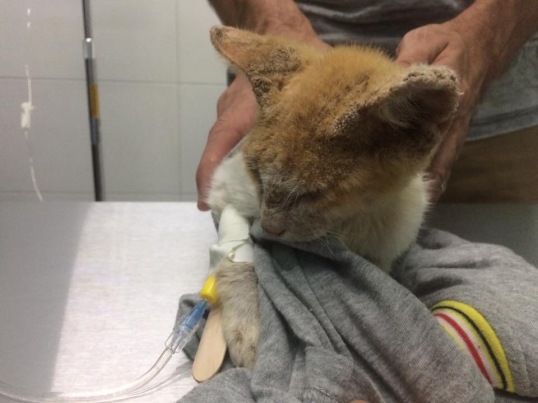 We brought the little guy to our house, got him all set up in a bathroom. I placed a blanket down and set him on it, he sank into it without even moving, and I ran to get him food and water. The vet clinic didn’t sell wet food and all we had was the dry we give our cats, so I soaked that in warm water for a minute and went back to the little guy. The moment I entered the bathroom he tilted his nose up and ran towards me — but it wasn’t me he wanted, he smelled the food. I set it in front of him and he ate like I’ve never seen anyone eat before — voraciously and with absolute abandon. I sat with him and, when he was done, began to stroke the fur on his body. He was filthy, covered in fleas and flea dirt (he’s not yet strong enough to be given the treatment for fleas), mange, dead skin — and he began to purr with a motor you wouldn’t believe, I got tears in my eyes as he fell asleep purring on his blanket.

This is him when I went in to feed him after he’d been with us a day — he didn’t want to eat, he only wanted me to hold him. So we sat like this for quite a while.

This was our snuggle time on the porch this morning. 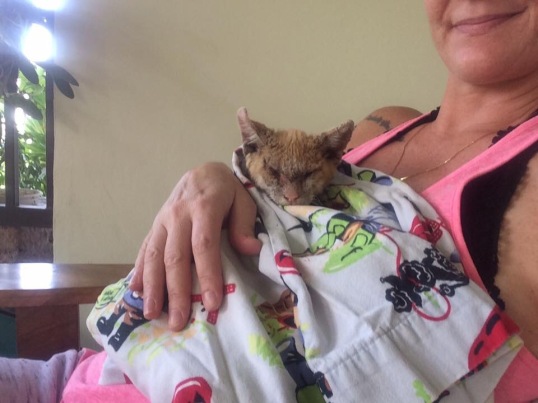 And this is him an hour ago — after he filled his belly and fell promptly asleep — purring. For the moment we are calling him “Cito,” as in “Pobrecito.”

So here’s our greatest fear for him, there’s a possibility he’s feline leukemia positive. The vet is concerned because for a case of mange to be this bad, especially in such a young kitten, there’s the chance he has an underlying condition, and that it is leukemia. We should know by the middle of the week, and we are all on pins and needles. I realize it’s no longer automatically a death sentence, but it certainly will make finding him his forever home more of a challenge.

He might not make it, all of the challenges he is facing — the malnutrition, the dehydration, the mange, the infection — might be too much for his tiny body. But we have to try, and we have to follow through on the promise I whispered into his ear when I scooped him up in my arms “never again, little one. Never again will you be alone or hungry or cold. You’re safe now.” And even if the worse happens at least he’s known love, at least he’s been held, at least he’s not hungry and suffering on his own. At least he has laps, and a foster mom who will hold him for hours, and a foster dad who, when he feels his lap get warm while holding him, calmly says “he peed on me, I’m going to go change. At least we know he’s not so dehydrated anymore!” before handing him to me with great gentleness.

Last night I posted a video to my FB page of him content in my arms. I was gently swaying and rocking him, the same way I swayed and rocked my own children when they were babies.In the video I said he didn’t want anything but to be held. One of my friends, and very favorite people, commented “You are Cito’s lifeline. You are his mother. You are the first iota of safe, peaceful rest he’s had since he can remember. Of course he doesn’t want to leave your arms.” I cried when I read that — because it’s true. And because I am so beyond grateful for the privilege of being able to help him, and so grateful for a husband who just nods when I tell him we can’t leave the kitten, and for children who say “we aren’t leaving him.” That is rescue. Unless an animal is truly beyond hope it isn’t our job to make like and death decisions, it’s our job to try our hardest to love them, to help them fight, to give them the physical and emotional sustenance they need in order to know life is worth that fight. That is rescue. Do you hear me, PETA? That is rescue.

*For anyone who would like to follow Cito’s journey, if you’re on FB, all my posts about him are public. And because, contrary to what PETA supporters have said about this blog, this isn’t an anonymous blog, my name is Heather Harper-Troje. Come see what Cito is up to!