It’s no secret that PETA kills the vast majority of the animals they take in at their Virginia headquarters — they admit to this, though lie about the circumstances, and my own experience as a field worker for PETA’s Community Animal Project gives me firsthand knowledge of their killing.

Since the first time I blogged about Black Boy, the dog who saved me from going too far down the PETA True Believer path, PETA has been working hard to discredit me. They’ve said I was lying, that I am a vindictive ex-employee who invented a “hateful fantasy” in order to enact revenge against them for firing me. Never mind the fact that I have nothing to personally gain by speaking about my experiences, or that I have been the target of a smear campaign and cyber bullying because I’ve been speaking out. Or that they sent a letter full of lies to my husband’s boss to try to get us to shut up (accusing us of “false and malicious” attacks and attempting to “interfere with PETA’s business”), and potentially endangering my husband’s career with their libelous claims.

I spoke out because I needed to make amends for the things that I did while I worked at PETA, because I wanted Black Boy to have a legacy of change and truth, and because I wanted to help the family of Maya, the dog who PETA employees stole and subsequently killed. Maya’s family is suing PETA and I have stated time and again in this blog that I will do whatever I can in order to help them find justice.

One of the ways PETA has attempted to discredit me is by saying the Community Animal Project (CAP) (the department responsible for the killing of Maya) didn’t even exist when I worked there so how could I possibly have knowledge of the work their field staff does? In fact, in court documents filed for PETA in the Maya case, PETA attorneys state, in reference to my blog and what I’ve written about PETA and their killing, “Indeed, at the time the blogger worked at PETA, PETA did not operate an animal shelter and did not have any program that would have performed the services provided at Dreamland II” (the trailer park where Maya’s family has their home, the home from which Maya was stolen before she was killed). This is a screen grab from a memo in support of motion to strike filed by PETA’s lawyers, from which I pulled the above quote, implying that I am lying about the fact that I was a field worker for CAP.

And this is the performance appraisal I received, which lists my position as “Fieldworker” and my department as “Community Animal Project.” I’ll also note, contrary to what PETA has alleged — that I was a poor employee — that I received an overall rating of “excellent” and was, in fact, given a raise. One of the people who signed the appraisal was PETA President, Ingrid Newkirk. 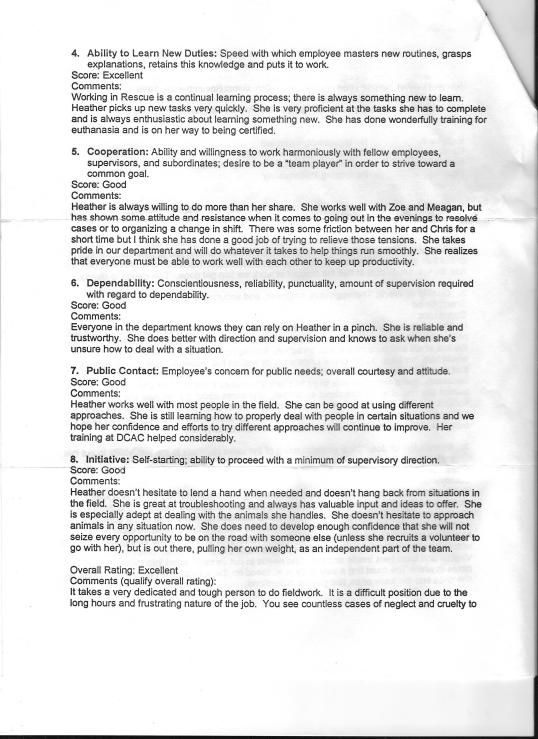 Obviously, my performance appraisal shows that the statement made by PETA’s attorneys, and filed in a court of law, is demonstrably false, and was designed to damage my credibility. In the end, it’s PETA who has the credibility problem.

What do you think? Cancel reply